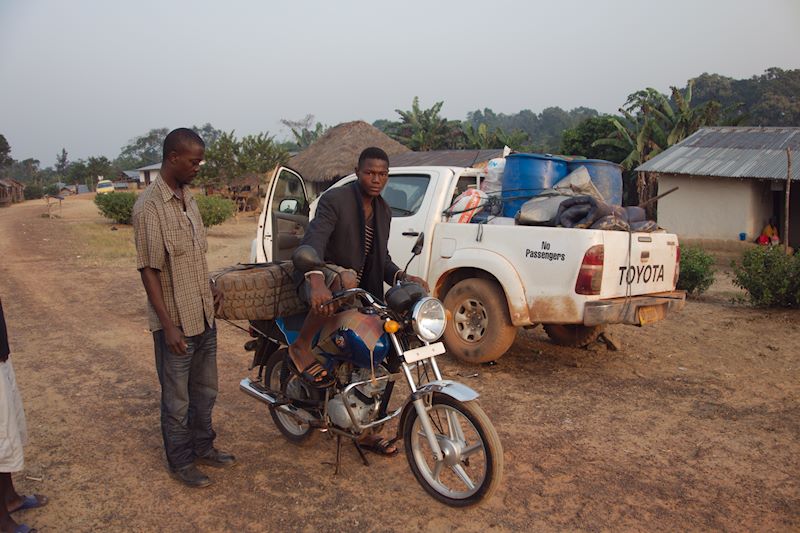 Originally it was planned to do a few days of mapping in the area. The main purpose however was to start the dozing of a new track through the bush for the drill rig which is due to arrive in 3 weeks. Well I was kind of overwhelmed with the news. Probably because the last two stints in Africa didn’t include overly much fieldwork and because I basically left on the same day I arrived back in Africa. It actually was the next day; however nobody told me that I had to leave the day before. So I just went to the supermarket and bought a few cereal bars for the lunch in the field, a soap and a few tissues. Grabbed the tent and a few cloths and off we went. First mistake was to assume a short stay because you never know what could happen. So I left my charger for the mobile phone because I thought the battery would last for a few days. I also left my computer because I thought I wouldn’t need it for a few days. In the end I needed both or at least I could have made use of the computer to write on my thesis during all these days of dozer breakdown and other things that didn’t work out.

In the evening we arrived in Kakata without problems. However since planning ahead is not a big virtue here we just heard that the other car we were about to meet here just left. That meant another two hours of waiting for us. After two hours they finally came but not without causing a small accident with a motorbike. Now normally I don’t like paying money to someone just because they are asking for it. This time however the fault was clearly on the side of our driver. He left the accident without solving the problem which normally means that he is guilty. Now because I didn’t want to wait another two hours for the police and whatever they would do about it I decided to pay the guy on the motorbike. After that I just heard that the car had starting problems and needed pushing to start it. Not a problem so we got 180 gallons which is about 650 litres of diesel. After that I discovered that one tire was low on pressure and we searched for someone with a compressor. After that was done we finally started our ride through the night. It was slow going on a very crappy road. Apparently the Chinese agreed to repair the dirt road from Bong Mines to Kakata in order with their MDA for the old Bong Mines. Now their idea of repairing it is not sealing it with asphalt but putting big rocks from their mine on top of the dirt. Well it prevents the road from getting too muddy but well the driving experience is also not delightful. At maybe 11 o’clock we reached the Bong Mines gate and turned left because everybody told us to and I’ve never been here before. Shortly after that I stalled the engine. First I thought it was due to the heavy load in the back. 650 litres of diesel must weight around 800 kg. The first time wasn’t a problem it even started on its own again. Maybe the trip charged the battery again came to my mind, but I also paid even more attention to noises the car made and found that the gear made funny noises. Similar to how the Lada of my brother sounded after the gear box had hit a rock. After I stalled it the second time on a small bridge it didn’t start again and we tried to push it backwards down the side of the road. It didn’t start and I somehow had doubts on my driving skills. After a longer discussion we tried to push it forwards towards the stream and it finally started again, must have been around midnight by then. Back on track and maybe another half an hour later my colleague started to get doubts on whether we were on the right track and we decided to ask someone in the next village. We actually found a woman who was still awake but she didn’t want to talk to strangers it seemed and the car stalled by itself. We didn’t manage to get it started again so we pushed it off the road and decided to sleep in the car at maybe one o’clock in the morning.

In the morning the tire that had pressure problems in the beginning was flat. After some problems with the spare tire and an injury because of the stupid mechanism to hold it up we managed to get it down just to discover that it was in bad shape and didn’t have pressure as well. So, one of us had to go to Bong Mines to fix the tire. The spare tire was useless anyway. During the time of hanging around next to the car I thought it might be a good idea to look at the engine and maybe find out why it stalled on its own last night. The front part looked a bit bent and the radiator for the AC was a bit loose. The AC wasn’t working for the last months because of a broken belt wheel so that wasn’t a problem. What was very disturbing however that there wasn’t any water in the engine cooling system. We emptied two buckets of water in it. After that I tried to start the car and it started up without problems. It didn’t even sound like an empty battery anymore. Several thoughts crossed my mind. Why was there no water in the radiator? Did we drive without water from the beginning last night? Is this very good for the water pump / engine? A gasoline driven engine would have experienced serious damage doing that. Why did this diesel engine run without problems? Even the thermal gauge didn’t show any elevated temperature. Is an engine that much harder to turn if it runs without water that it sounds like that battery is empty while starting? Well after a few hours one of us returned with the fixed tire. And we had a mobile car again, still with 650 litres of diesel in the back. By that time we also realized that we used the wrong road and had to go back to the gate because the dozing should start on another end.

After about half an hour driving back I stopped at a river to check the water level. It was actually boiling but not on top. That meant there had to be a leak on the radiator. After closer inspection I saw that the AC radiator was pushed against the engine radiator and water was running out between them. Probably the accident or whatever happened to the front of the car that bent everything also pushed the radiators together. Maybe by that or by the vibrations from driving the AC radiator punctuated the engine radiator and there were two med sized holes in it. Fortunately I had some string in my backpack and we fixed the AC radiator to the front that both were not touching each other anymore. From there on we stopped at every river to top up the water in the cooling system. Finally we made it to Bong Mines and asked for some radiator leak stuff. Unfortunately it didn’t work. Not only that everybody expected me to be able to read the Chinese instructions, I got the impression that it was also 10 years overdue because about the only thing I could read was 2002. Well in the end the holes would have been too large to fix that way anyway I guess. So we continued and in the afternoon we finally arrived were we wanted to go.

In the end I can say that this was quite an experience and I’m glad that I wasn’t driving on my own without colleagues. It should turn out that the car had an accident and the last driver decided not to tell us about it nor mention the tire problem. Apparently most of it was known to him. In the end that and because it wasn’t the first time meant for him that he is no longer working for us.

3 thoughts on “A road experience”

This site uses Akismet to reduce spam. Learn how your comment data is processed.